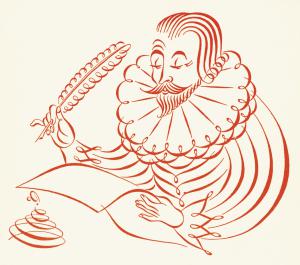 “Love is not love Which alters when it alteration finds, Or bends with the remover to remove. O no, it is an ever-fixed mark That looks on tempests and is never shaken; It is the star to every wand'ring bark, Whose worth's unknown, although his height be taken."

Few collections of poems intrigue, challenge, tantalize, and reward us as do Shakespeare’s Sonnets, all written in the English sonnet form. It is not just the beauty and power of individual sonnets that engage us, but the story that their sequence seems to tell about Shakespeare's love life, whenever one reads the Sonnets in the order in which they appear in the 1609 Quarto.

It goes something like this: The first 17 sonnets advise a beautiful young man to marry and produce a child. The next 109 sonnets urge the poet’s love for him and claim that the poems will preserve his beauty. The supposed narrative concludes with 28 sonnets to or about a "dark lady."

Evidence that puts the narrative in doubt seems to matter very little. Most critics and editors agree that the sonnets are only linked within specific clusters; they were written perhaps over many years and perhaps to or about different people. Only about 25 specify the sex of the beloved.

Yet such facts surrender to the narrative pull of the 1609 collection. The persona of the poet and the sequence of emotions are so strong that few editors can resist describing the Sonnets in terms of their irresistible story.