HENRY V (Scroll Down for Resources) 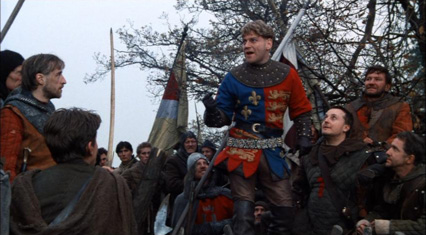 "But we in it shall be remember'd; We few, we happy few, we band of brothers; For he to-day that sheds his blood with me Shall be my brother; be he ne'er so vile, This day shall gentle his condition: And gentlemen in England now a-bed Shall think themselves accursed they were not here, And hold their manhoods cheap whiles any speaks That fought with us upon Saint Crispin's day."

Henry V begins at the English court, where the young king is persuaded that he has a claim to the throne of France. When the French dauphin, or heir apparent, insults him by sending him tennis balls, Henry launches his military expedition to France.

Before departing, Henry learns that three of his nobles have betrayed him, and he orders their execution. Meanwhile, his old tavern companions grieve over Sir John Falstaff’s death, and then leave for France.

Henry and his army lay siege to the French town of Harfleur, which surrenders. The Princess of France, Katherine, starts to learn English, but the French nobles are sure of success against Henry. Instead, Henry's forces win a great victory at Agincourt.

After a brief return to England, Henry comes back to France to claim his rights and to set up his marriage to Princess Katherine. The play’s epilogue points out that Henry will die young and that England will as a result lose most of his French territories.